In 2002, the Intercommunal Industrial Area Gansbachtal (IKG) between the two central Hessian municipalities of Steffenberg and Angelburg was developed. Since – despite some efforts – only a small part of the space has been marketed so far, the municipal authorities considered for the first time in 2019 to set up a medical center there. The goal: the creation of an intercommunal health center.

Well taken care of in the new Gansbachtal

A good occasion for CHRISTMANN + PFEIFER to think further about this idea as part of a project development – after all, the area is on their own doorstep at the company's headquarters in Angelburg. The approach: expand the purpose of the actual industrial area and not leave it with the establishment of the health center. Instead, a medical and nursing district should be planned and the area should be used in a targeted manner. The idea: the establishment of a health center with the involvement of local players from the fields of medicine, nursing, pharmacy, etc.

In July of this year, the board of directors and the association assembly of the IKG set the course towards implementing this concept: the decision to sell four properties to CHRISTMANN + PFEIFER marked the start of this model project, which is unique in the region.

“The municipalities cannot manage project developments of this magnitude on their own. We can help as a private partner. As a local company, we feel obliged and connected to the region and try to upgrade it by providing a future-oriented development. This also benefits the attractiveness of both municipalities,” explained Jörg Schwarz, managing director of C + P Dynamic Living Sources GmbH & Co. KG, at the time.

Step by step, it is now time to go through all the stages that ultimately make the idea a reality. In contrast to a clearly defined construction contract, there are still some requirements to be met before the start.

At the beginning of October, the purchase contract for the land was notarized. This means: From now on, the areas can be prepared with the building application for filling up for further development. The first talks with other parties involved are already underway with regard to the planned health center and the senior citizens' and care facilities planned as part of the development of the district – as well as the necessary adjustments to the development plan. 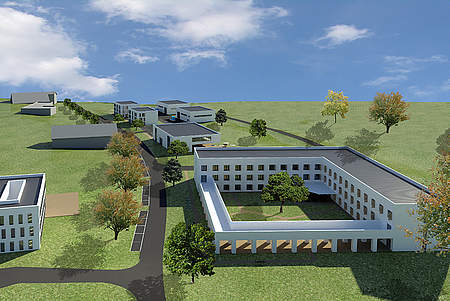