The Steel Construction Hall at CHRISTMANN + PFEIFER Resplendent in All Its Glory.

Steel structures and song – two things that you doesn't immediately associate with one another. But this changed fundamentally on Saturday November 8, 2014 in Breidenbach and the surrounding area. Because, on this day, one of the most unusual concerts was held in a very unusual atmosphere - at our steel structure plant in Breidenbach. The hall on the factory site, in which outsize large components for bridge building and structural steelwork are normally made, provided an imposing backdrop for vocal performances from 250 singers and musicians from various choirs and groups. This novel concert concept was both aurally AND visually stimulating.

Since its 1,100 year anniversary celebrations, the community has known that choir music from Breidenbach is synonymous with the highest musical quality. The singers decided to gift the community of Breidenbach a major choir concert in appreciation of the multifaceted support they received over past decades. And this had to take place in an appropriate framework. The choir turned to the management of CHRISTMANN + PFEIFER (C + P) with their idea of holding the concert in an industrial environment. Here, the choir found an open ear - in the truest sense of the word. The idea of presenting choir music in a hall that is usually used for manufacturing bridge sections immediately met with full approval. The choir was promised full support. On the first Saturday in November 2014 sounds emanated from the hall - instead of sparks - and workpieces of a completely different sort were present. The concert was correspondingly held under the name "workpieces". Its intensity, dramaturgy and therefore poetry too, were enhanced by the unusual combination. The hall played host to nine choirs and other singing groups, who performed classic and sacred pieces, romantic arrangements, folk songs together with modern titles - all with excellent acoustics.

The chairman of the male choral society project choir, Erwin Müller, was already convinced that the "Structural Steelwork Concert" would be a success: "All of the singers in the "old" male voice choir were delighted that so many new singers took note of our "call to arms". It's clear that everyone involved with the project identifies with it and is enthusiastically involved. Without the support of the community, and CHRISTMANN + PFEIFER in particular, this unusual venture would not have been possible. I would like to convey my sincere thanks for this!"

Choirmaster Tobias Hellmann has been the musical mastermind of the choir for the past year-and-a-half. The members enjoy singing under his direction and it is also his efforts that have kept the Kleingladenbach Male Choral Society, one of the most successful male voice choirs in the hinterland for decades, among the top choirs of the region. The concert gave him an opportunity to show how engaging choir music can be, by also incorporating modern pieces, such as songs from the Wise Guys and the German group "Toten Hosen", which supplemented the classical repertoire. The final piece "One Fine Day" was enough to rouse the audience of 650 and get everyone on their feet.

"At CHRISTMANN + PFEIFER we have always endeavored to support the region and, of course, the people here in the hinterland. I am incredibly impressed at the number of people who can sing and make music on such a high level," commented C + P CEO Rolf Heinecke on the evening. It was, therefore, natural for CHRISTMANN + PFEIFER, together with district administrator, Kirsten Fründt, and the mayor of the large community of Breidenbach, Christoph Felkl, to assume the patronage for the concert program in the unusual ambiance. The mayor emphasized, "The format is super. All of the choirs in the Municipality of Breidenbach gave a wonderful performance on the occasion of the 40th anniversary of the wider municipality. The concert venue was, of course, a particular attraction. This once again documents the intensive link with Breidenbach as a commercial center." Perhaps the combination of steel and song isn't quite so illogical after all. Because, as Jürgen Tesch, CEO of C + P Industriebau bei CHRISTMANN + PFEIFER, himself from Kleingladenbach, said as the project was coming into being: "It's not only steel that connects, but music too."

So it wasn't at all surprising that the concert ended after 3.5 hours with standing ovations. Both the audience and artists were equally fascinated by the concert and ambiance. 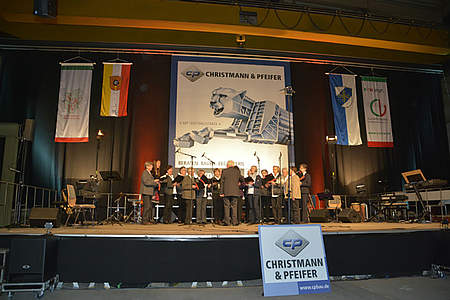 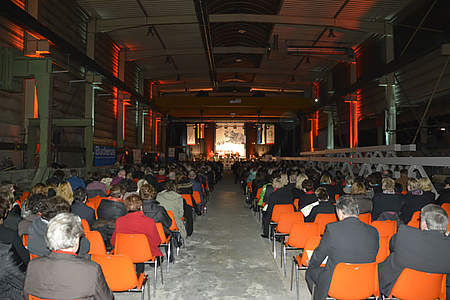