At the beginning of September 2013 the groundbreaking ceremony took place for the observation tower to celebrate the 1,100 year anniversary of the community of Breidenbach. The tower had already been completed by the end of September 2013. Constructed of galvanized, long-life steel, the observation tower stands high over the community and has offered a spectacular view ever since. At CHRISTMANN + PFEIFER we have long known what many visitors have now discovered for themselves: how uplifting an approximately 20 ton steel structure can be. The tower comprises three supports, two walkable intermediate platforms and the viewing platform. Ascent takes place via a spiral stairway that winds around the center axis.

Already at the time of groundbreaking, one of the two CEOs of CHRISTMANN + PFEIFER, Uwe Hainbach, said that the tower being built by C + P - and also largely funded by the company - is a mark of the company's commitment to this region in which it is based and where it has its traditional roots. He also predicted that the anniversary observation tower would become an attraction in the region and that it would provide a new view of the surrounding environment. He should be correct on both counts. It seldom becomes so apparent that the community depends on the companies based there and, conversely, that companies depend on the community. The tower is also a good symbol that foresight and attention to detail – as always at CHRISTMANN + PFEIFER – go hand-in-hand, and that people are always more constructive together. Inauguration of the tower took place on June 14, 2014, with a "tower festival" that is to be repeated annually. 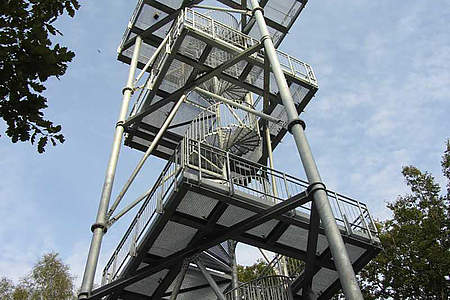 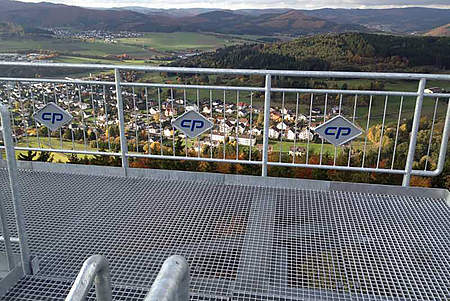