On the weekend of April 27 to 28, 2014, the Carl-Ulrich Bridge in Offenbach, on the city limits of Frankfurt, attracted a large number of onlookers: During the course of its construction, the 1,100 ton center section of the new Carl-Ulrich Bridge was first loaded onto pontoons and gradually floated out into the middle of the river. It was then completed in-place, parallel to the old bridge.

To ensure that the essential transport arteries in the Mainbogen (bend of the River Rhine) between Offenbach and Fechenheim continue to flow freely, the Carl-Ulrich Bridge is currently being rebuilt as a new structure, while traffic continues to flow over the old bridge. The new bridge is being erected as a composite steel bridge, large sections of which can be prefabricated. The individual sections are being built in Elster an der Elbe, where CHRISTMANN + PFEIFER maintains one of three production facilities in Germany. Very few steel construction companies in Germany are still able to produce steel elements of this size. "To ensure disruption to the public is minimized and achieve the shortest possible construction times, we prefabricate large components at the factory," comments Oliver Schreiber, CEO of CHRISTMANN + PFEIFER Brückenbau in Bad Homburg. A single large component measures 40 meters in length by 5 meters in width and weighs 100 tons, almost the same as a blue whale.

After approximately 3 months of preparation on the river bank the steel structure of the center section of the bridge was complete. With an overall length of 150 meters and span of 112 meters it stood on dry land, on part of the river bank close to the existing bridge that had been backfilled especially for the construction work on the River Main. To complete the bridge, this behemoth had to be floated out onto the water and then placed on an auxiliary structure in the Main, alongside the still standing old bridge. To do this, a steel structure on many wheels, a so-called "millipede", was maneuvered beneath the bridge section. In this way, the huge steel structure was lifted and carefully placed onto the pontoons. The 1,100 tons of this bridge section were then turned and floated into position with the help of cables and winches. Because this took place downstream, the water current helped with the turning maneuver. Parallel to the old bridge the new bridge was then fully completed "in a sideways position": From the river bank on the Offenbach side a heavy-duty crane lifted two further long elements (750 ton crane) into place, while two heavy-duty cranes (two 200 ton cranes) on the Frankfurt side delivered four shorter elements which were then welded to the center section. The overall weight of the bridge now amounts to 1,300 tons. The concrete roadway slab is then constructed in several sections using a formwork carriage, which can travel along the steel structure. Work follows to install the railings, light poles and sidewalks. The old bridge will then be demolished and the new, fully completed bridge laterally shifted from its construction position into the roadway axis and connected to the roadway there. The new Carl-Ulrich Bridge is now ready - with only minimum disruption to traffic.

The new bridge is more convenient for all road users, and for shipping too. The width between the railings has been increased from 13 meters to 14 meters. This has made the sidewalks and cycle paths wider. Moreover, the new bridge requires fewer supports. Instead of the previous six supports the new bridge only has 4: two on each of the river banks and two supports in the water. The elimination of two supports means that the width of the main center span is increased from the current 41 meters to 112 meters, representing a significant benefit to shipping on the River Main.

Developer and funding party of the bridge is the German State of Hesse (Hesse mobile road and traffic management), represented by DEGES project management. Working in excellent cooperation, CHRISTMANN + PFEIFER was responsible for the bridge and steel construction work, while Porr Deutschland was responsible for the concrete, soil and hydraulic works. 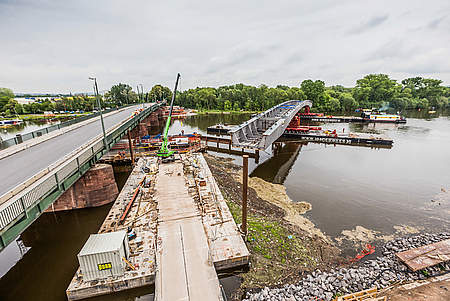 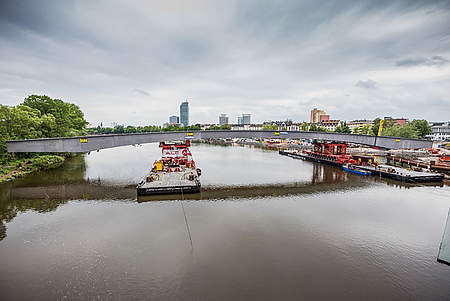