Preflex® girders at the Marktbrücke in Hagen even withstand the flood

In July, the heavy storms and floods in Germany also struck the city of Hagen in North Rhine-Westfalia. When Chancellor Merkel visited the city at the beginning of September, the damage was still evident: the Volme, a tributary of the Ruhr, had turned into a torrent within a few hours. Several bridges were completely destroyed - one bridge collapsed, the middle girder broke in another, and a pedestrian bridge was torn away in its entirety by the floods. Just a few weeks before the disaster, CHRISTMANN + PFEIFER had erected the new market bridge over the Volme in the middle of the flood area. Therefore, there was now a great sigh of relief when it became clear: It was precisely this new bridge that actually survived the flood unscathed, while many other structures were damaged. An accident? Not at all. What made the Marktbrücke, of all places, particularly steadfast? And why does it make sense to use more bridges of this type in the future?

The secret is the Preflex® girder. Developed as early as 1975, CHRISTMANN + PFEIFER also uses it for bridges with small and medium spans. As soon as particularly large slenderness with maximum girder stiffness is required, these prestressed double composite girders are usually used in supported single or multi-span superstructures. The Marktbrücke in Hagen, for example, was constructed from 13 Preflex® girders - each girder 33 meters long and weighing around 55 tons. The space under the bridge is used minimally, the construction height is significantly lower compared to other bridge structures. In the event of a flood, the bridge allowed a greater flow, and no pieces of wood or the like could get stuck on the smooth surface and block the water's path.

Regardless of whether it is a road bridge or a railway bridge: The advantages of a Preflex® bridge are of course not limited to extreme weather conditions. The bridges also score points in terms of durability: because the steel girders are completely encased, they are optimally protected against corrosion. Due to the combination of composite construction and solid construction, they are generally extremely robust and the process is also convincing in terms of construction and manufacture. Because the girders are pre-produced in C + P's own production facilities, the bridges can be erected largely independently of the weather. With the quick assembly without welding work on the construction site, neither formwork nor scaffolding is required and the traffic areas below are hardly affected. Added to this is the durability of the steel. In short: Preflex® bridges have not only qualified for a multitude of purposes since the flood disaster - and in this current case as a quick, sustainable and long-term replacement. 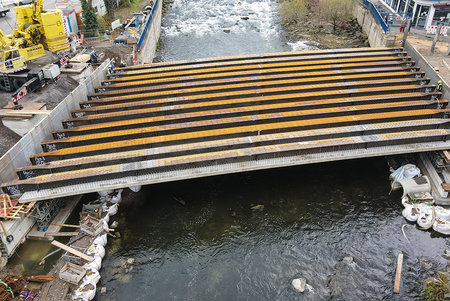 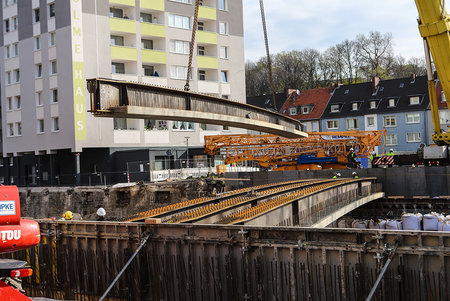